What is a Circle Progression? (Using the Circle of 5ths and 4ths)

Home Blog What is a Circle Progression? (Using the Circle of 5ths and 4ths) 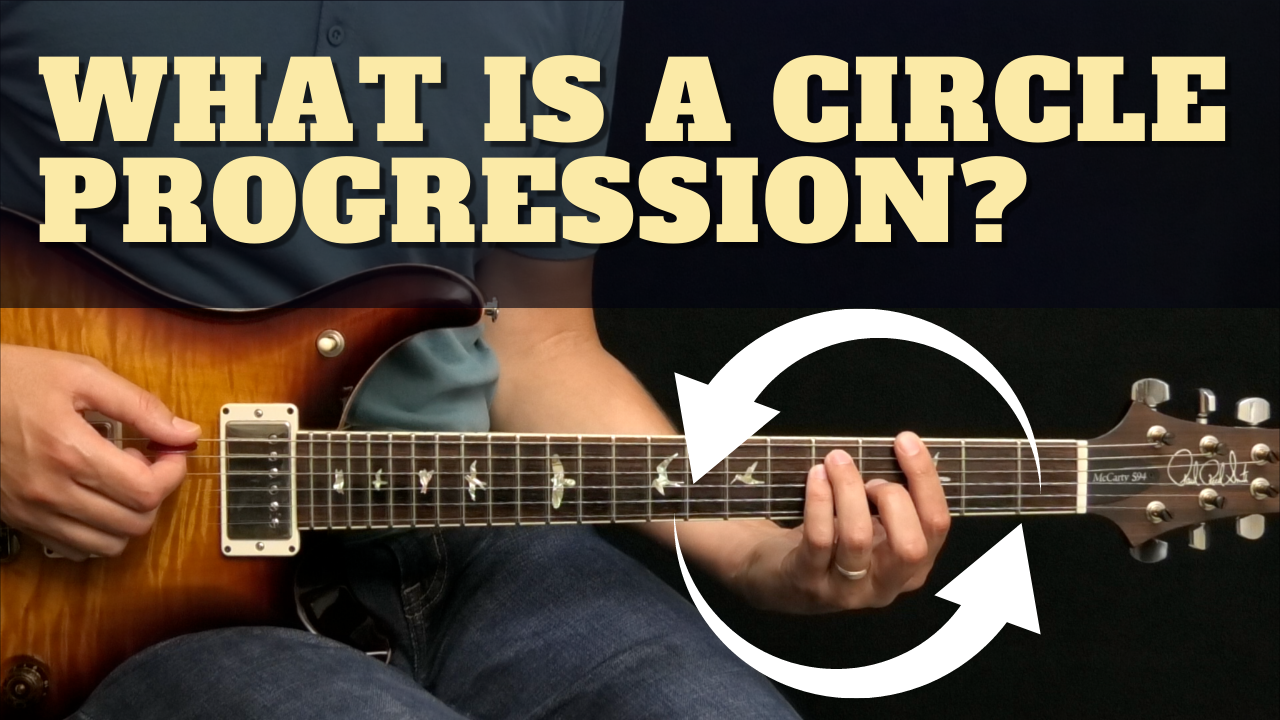 What is a Circle Progression? (Using the Circle of 5ths and 4ths)

Circle chord progressions refer to chord movement based on the circle of fifths in music theory. The circle of fifths is used to represent relationships between the different key signatures. This information is most useful when you are notating standard musical notation and not always relevant to how we guitar players approach music on the fretboard. But, knowing how to move in fifths and recognizing songs that use chord progressions to follow this pattern certainly is useful.

If you are familiar with the harmonized major scale and its series of seven chords, then you can begin to understand chord movement in fifths by thinking about the relationship between the I and V chords (1 and 5) in each key. Beginning on a C chord in the key of C, it works like this:

I could keep going, but we’ll stop here. When you play the chord changes C G D A E, you’re playing in 5ths because each move is to the previous chord’s 5th. If you keep going with this same concept, you’ll eventually circle back to your starting point, C, hence the name “circle of 5ths.”

Going back to our original chord progression example of C G D A E, don’t try to fit these chord changes into one key. Each chord change in this circle is a key change to a new key. Music doesn’t normally change keys this often. Generally speaking, music centers on one tonic pitch and stays in one key with only a bit of modulation or use of borrowed chords, but one exception is a circle of 5ths progression. When done right, 5th movement sounds good and our ears don’t seem to mind all the key changing. A good example of this is the song “Hey Joe” by Jimi Hendrix. Its basic chords are C G D A E.

In some cases, music is based on diatonic circle movement. This means you move in 5ths or 4ths but you stick with the structure of one scale and its major/minor chord sequence. A good example of this is the song “I Will Survive” by Gloria Gaynor. It’s in the key of A minor and moves diatonically through the scale in 4ths (or 5ths depending on how you think of it) using the chords Am Dm G C F Bm7b5 E7.

All the chords in “I Will Survive” retain their natural major/minor quality according to the key. Also, notice how the move from F to B is a sharp 4th because there is no B natural in the scale. Finally, this progression ends with E7 from the A harmonic minor scale instead of the minor scale’s normal Em (and technically, there’s an E7sus4 before the E7). Playing a dominant seventh 5 chord in a minor key like this is very common.

As stated earlier, the circle of fifths is used to represent relationships between the different key signatures used in standard musical notation. This information is not always relevant to how we guitar players approach music on the fretboard but knowing how to recognize and make use of 5th and 4th movements certainly is useful. This might help you understand the next song you play that appears to combine unrelated chords. Maybe the chords don’t fit into one key because they’re based on a circle progression. In other cases, you might be circling within a key. Maybe the next song you write will make use of this composition technique.

To learn more about the circle of fifths and music theory, see my books Fretboard Theory and Guitar Theory For Dummies.