Using Isolation Enclosures to Reduce the Sound of Guitar Amps

Using Isolation Enclosures to Reduce the Sound of Guitar Amps

In podcast episode 87, I answer questions about amps and ways to reduce noise.

As a follow-up to that discussion, I want to share my experience playing in a hall that had amp isolation enclosures offstage for guitarists to use.

Here’s a pic of the stage during the set.

Here’s a short video from the setup where you can see the amp enclosures. 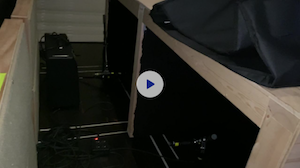 There’s a little more to the story. Ryan’s pedalboard…

When Ryan records at home with his amps, he mics them up in a closet and surrounds them with soundproofing boards made from plywood, upholstery fabric, and a product called SAFE’n’SOUND.

You see the amp exposed in the pic above. When Ryan is recording, he covers the amp up with more soundproof panels like you see him holding below.

With his amp in the closet surrounded by sound-proof insulation, Ryan can work at his desk in the next room and record tracks at a comfortable level using his studio monitors. Check out Ryan’s work here.

So, now you see some of the tricks of the trade used in live and studio situations to reduce the amount of noise made by real guitar amps. With these sound-reducing techniques, guitarists can crank up the volumes on their amps to hit the sweet spots without the noise being overbearing for themselves and others.

Another idea, which I prefer, is to go “direct” using a digital amp modeler or profiler like those made by Line 6 and Kemper.