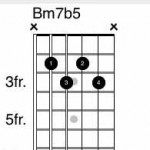 Chords can be built on each degree of the major scale. Using a thirds sequence (every other note) there are three types of triads (groups of three notes that make basic chords) that naturally occur using the notes of a major scale. Using the key of C as an example, the chords derived from the scale are:

The most unusually chord in the major scale is the one built on the 7th degree. It has a minor third, but unlike all the other chords in the scale it does not have what’s called a perfect fifth. Instead, its fifth is flattened a semi-tone (half-step or one fret). For this reason it’s called a minor flat five chord (mb5). This triad, 1-b3-b5, is also know as a diminished triad.

Most music avoids the mb5 chord. If it comes up at all, it’s usually in a minor key and in a minor seven form, m7b5, which is also called a half-diminished chord. A good example is the changes Bm7b5-E7-Am.

You hear these changes used in sections of “Smooth” by Santana, “Still Got the Blues” by Gary Moore, and “I Will Survive” by Gloria Gaynor.

In the sample progression above the tonic (primary chord) is Am, which means that the music is in the key of A minor. When you renumber the chords from C major starting on A, you get:

So the chord changes Bm7b5-E7-Am become a type of two-five-one in a minor key. The Em chord is played as E7 (featuring G# as opposed to the scale’s G natural) which produces a dominant push to the the tonic chord, Am, and temporarily creates the so-called harmonic minor scale. You might see musician’s write these chord changes out in Roman numerals as II-V-I or maybe even ii-V-i with lowercase Roman numerals representing minor chords. Other possibilities include iib5-V-i and iim7b5-V7-i.