“Two Tickets to Paradise” by Eddie Money is a great example of using guitar modes. The song uses notes and chords from the D major scale, but with the fifth, A, functioning as the tonic. When the fifth degree of a major scale is the tonal center of a piece of music, it produces Mixolydian mode.

There are two guitars that play the melodic riff that is the signature hook in this song. The scale used is A Mixolydian mode (a.k.a. A dominant scale), which is really just the notes of D major beginning on the fifth, A. Gtr. 1 starts on the fifth of A, E, and Gtr. 2 starts on the third of A, C#. C# and E are separated by three scale degrees (C#-D-E, one-two-three) and the two guitar lines maintain this interval separation throughout the riff, so this harmony part is considered playing in thirds.

The lead guitar solo, which starts around the 1:44 mark, is almost entirely A major pentatonic.

You can preview the tab to this song at the link below or buy and download the whole score. 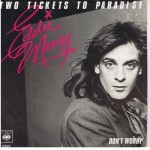 Hailed as a “music-theory expert” by Rolling Stone magazine, guitarist Desi Serna is a music instructor and author who has written several books including Fretboard Theory, Guitar Theory For Dummies, and Guitar Picking Mechanics. He has a practical, hands-on approach to teaching, with a focus on the guitar fretboard and emphasis on popular songs. Desi honed his craft through decades of teaching, performing, and publishing. He lives in the Nashville, Tennessee area.