Tom Sawyer | How Does This Song Work?

Home Blog Tom Sawyer | How Does This Song Work? 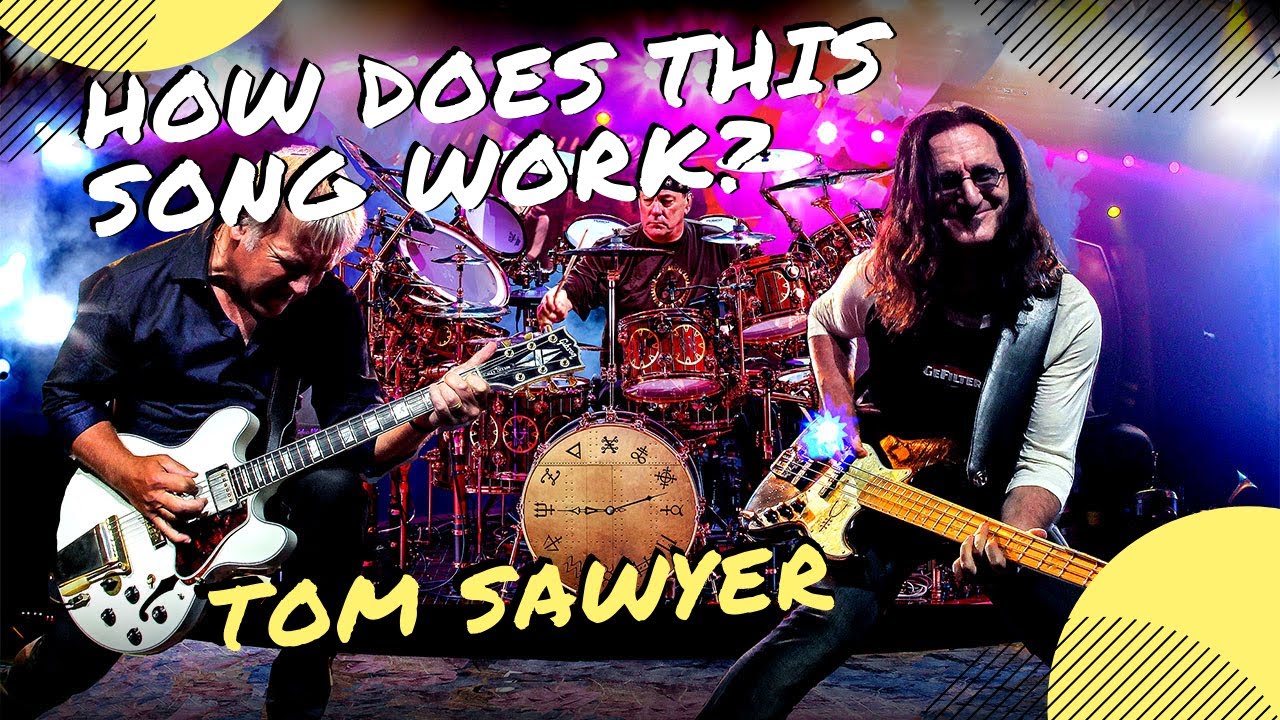 Tom Sawyer | How Does This Song Work?

In this free guitar lesson, I analyze some of the guitar parts heard in the song “Tom Sawyer” by Rush and explain how the parts work. You get to know the song’s music theory including the key, chords, chord progressions, scales, modes, and more. I also discuss guitarist Alex Lifeson’s musical influences and how “Tom Sawyer” borrows ideas from music by The Who, Led Zeppelin, and Cream.

Let’s dive in. The first section of the song looks and sounds like this:

So, you have four chord shapes and you pump on the open 6th string, E, before playing each chord.

The first chord is E… The second chord is an unusual form of Dsus2. You might know Dsus2 in the open position like this… It’s called Dsus2 because you’re “suspending” the D chord’s 3rd, F#, by replacing it with a 2nd, E.

Here’s a common way to play the same chord shape as an “A form” barre chord… And if I take the 2nd, E, and also play it on the 5th string, I end up with the chord shape used by Alex Lifeson. Even though this chord no longer contains the root, D, in the bass position, I still call it Dsus2 because 1.) it contains notes from a Dsus2 and 2.) I hear bassist, Geddy Lee, playing the root D in the music. So, overall, I hear the sound of Dsus2 in the music.

Finally, this song section finishes on Csus2 like this… This is the same chord shaped used for Dsus2 only one whole step lower. You should think of it as coming out of this form…

OK, so that’s how the chords are played in this first section. You’ll notice that the added chord tones in the chords make the sound bigger and more colorful than ordinary chords, and on top of this, the effects in use give the guitar sound a lot of depth and dimension. These types of chords and effects combine to make Alex Lifeson’s trademark sound. Lifeson’s playing is part of what made Rush’s music sound so big even though the band included only three members.

Alright, so the “Tom Sawyer” chord progression is definitely out of the ordinary. In fact, at the time it was pretty cutting edge. So, how did Lifeson come up with the idea to compose something so unique? I believe “Tom Sawyer ” is directly influenced by music from The Who and Led Zeppelin, which are two bands Lifeson credits as being major influences.

Here we have E5, D5, and A5, just like “Tom Sawyer.” Who guitarist, Pete Townshend, even pumps on notes a bit before hitting the chords, not too unlike what Lifeson does in “Tom Sawyer”… So the song “Who Are You” provides most of the basic structure used in “Tom Sawyer.” To get the added chord tones, we can look to the music of Led Zeppelin.

Countless Led Zeppelin songs make use of open position chords that feature added chord tones. Guitarist Jimmy Page would often remove and add fingers from basic chord shapes in order to vary his sound. You hear this in songs like “Thank You” and “Stairway to Heaven” just to name a few…

So, if you take the chord progression from “Who Are You” and add some of the chord tones used by Jimmy Page, you basically get “Tom Sawyer.” …

Other parts of “Tom Sawyer” use more of the same ideas.

It may be easy to take the chords to “Tom Sawyer” and trace them back to their origins after the fact, but it took the genius of Alex Lifeson to come up with the idea to take things to a new place. That’s why he’s in the Rock and Roll Hall of Fame and I am not.

Overall, I see “Tom Sawyer” as being in the key of E, and I see the E minor scale serving as the underlying structure. E, D, A, and C are all minor scale intervals. Rush made frequent use of the modal interchange composition technique, which is why “Tom Sawyer” sometimes uses chords from E major.

Once you get to the solo section, the music shifts to E Mixolydian mode. The keyboard and guitar play a motif in E Mixolydian that is based on a melodic pattern in descending thirds… I should also point out that this section of the song features the odd time signature of ⅞. Each measure of music includes 7 eighth notes…

Lifeson is also on record claiming that he was very much influenced by the music of Cream. In fact, he says that in the early days of his partnership with Rush bassist, Geddy Lee, he and Lee used to spend a lot of time practicing Cream songs. This doesn’t surprise me, because the guitar solo in “Tom Sawyer” is very similar to the guitar solo heard in Cream’s “I’m So Glad.” Here’s a bit of the Cream solo played by Eric Clapton beginning at 1:25… Same scale and the techniques you hear Lifeson use in “Tom Sawyer.” I talk a lot about every guitarist’s need to learn songs in order to develop playing skills and develop a vocabulary. It’s how everyone learns how to play, even players who are known for their unique styles, like the members of Rush.

In an interview from 2007, Alex Lifeson describes the recording of his guitar solo in “Tom Sawyer” by saying he winged it in about five takes without overthinking it. But what he didn’t include in that particular statement was the years he spent diligently practicing solos by his favorite guitarists that include Eric Clapton and Jimmy Page. Lifeson was only able to “wing” a great guitar solo because he had already put in the work to develop his guitar soloing skills. Keep that in mind as you work on your own playing. There are no shortcuts.

Alex calls B chord chorus. Bsus2/F#, A, A/G (From Talking about my Generation).

So now you understand how Rush’s defining piece of music, “Tom Sawyer,” is composed. “Tom Sawyer” is complex and doesn’t follow a standard form, but with a little music theory and familiarity with Rush’s influences, you can see how the song came together. You can also see how your playing can come together by following the same process that makes great players like Alex Lifeson.