The difference between diatonic and pentatonic scales.

Home Blog The difference between diatonic and pentatonic scales. 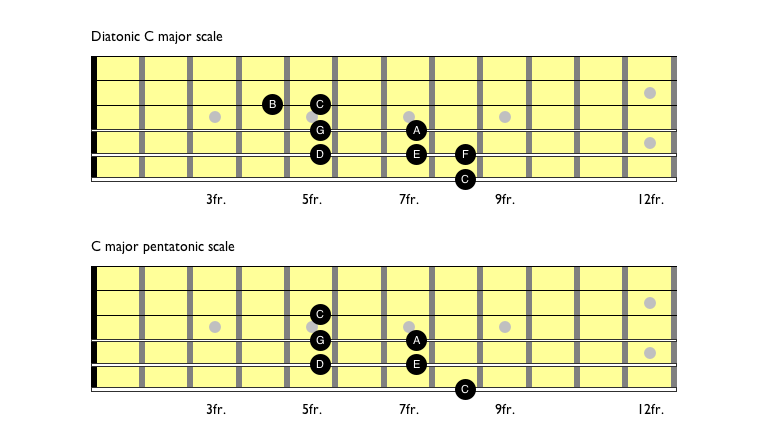 The difference between diatonic and pentatonic scales.

1. What is the difference between the diatonic and pentatonic scales?

This is a great guitar theory question. The term diatonic basically means two tones. This refers to the two different kinds of steps that occur in major scales, whole step and half step. The word is also used to indicate when something stems from one key. For example, “this riff is all diatonic” means that all of its notes are straight out of the parent major scale. Or, “this guitar solo is not diatonic” means that it features notes that are not part of the parent major scale (like chromatic passing tones). 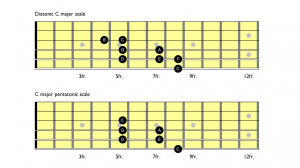 Kinda confusing isn’t it? Just remember that in music the term diatonic refers to the parent scale of a key, and parent scales are the kind that feature the two diatonic steps, half and whole. Diatonic can also refer to any note or group of notes that are found within the parent scale. This includes chords too. For example, the chords to the C major scale are C-Dm-Em-F-G-Am-Bmb5. You can say that the chords C, F, and G are “diatonic” to the key of C, but the chord D is not (but Dm is!).

2. How can I play a pentatonic scale over a song that uses chords from the major scale?

For example, the song “Wonderful Tonight” by Eric Clapton is based on a 1 5 4 5 (G D C D) chord progression in the key of G. The G chord is primary since everything pulls to and resolves on it. So you can play G major pentatonic scale patterns over the whole song. Just position pentatonic pattern one so that the second note is G (the relative minor is E).

The guitar solo to “Stairway to Heaven” by Led Zeppelin is based on a 6 5 4 chord progression in C, with the 6 chord Am functioning as primary (this can also be viewed as vi bVII bVI in A minor). So you can play A minor pentatonic patterns over the whole progression. Just position pentatonic pattern one so that the first note is A.

In order to use the correct major scale, you must take the whole progression into account, not just the primary chord. So in the first “Wonderful Tonight” example play G major scale patterns because that’s the only major scale that contains all the chords G, C, and D together. In the second “Stairway to Heaven” example play C major scale patterns because that’s the only key that contains the chords Am, G, and F together. The A minor scale (not to be confused with the A minor pentatonic scale) is relative to C major and they contain the same notes.

Scale patterns and their use, as well as chords, progressions, modes, and more are taught in Fretboard Theory