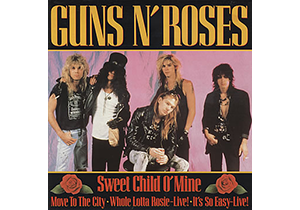 Sweet Child O Mine Solo Lesson
In this free online guitar lesson I demonstrate how I play the guitar solos in “Sweet Child O’ Mine” by Guns N’ Roses featuring lead guitarist Slash. These examples are suitable for intermediate and advanced level players who have learned pentatonic, major and harmonic minor scale patterns. You can follow along using the free tools below including guitar tab, a play along guitar backing jam track, and an audio mp3 of the performance.

Tablature
You can view and download my free Sweet Child O Mine Guitar Solo Tabs PDF file here. This file is just an interpretation of some select song parts.

Backing Track
You can stream and download my free Sweet Child O Mine Solos Backing Track Standard Tuning. It includes the accompaniment for all the guitar solo sections strung back to back.

Audio-only Performance
In addition to the video demonstration, I also have an audio performance of the solos I play. This is a separate take from the video, so the performance may be slightly different.

Guitar Tuning
The original recording was played by Slash with all stringed instruments tuned down a half-step to Eb. My version is played in standard tuning, low to high E A D G B E.

Sweet Child O Mine Chords, Progressions, and Scales
The first and second guitar solos are played over the chord progression D-C-G-D. These are the three major chords from the G major scale.

While the D-C-G-D progression is drawn from the G major scale, it’s actually the 5th degree, D, that is used as the tonic. In other words, D is the primary chord and where the music begins and ends. When the 5th degree of the major scale is used as the tonic, it’s called Mixolydian mode. See Fretboard Theory Chapter 8. For this reason, you use G major scale patterns over the progression for melodies and solos. And because D is the primary chord, you can also use D major pentatonic over the whole thing. I play the first two solos in the position of D major pentatonic pattern one, and add in the notes G and C, which are a 4th and b7th if you count D as 1. The D major pentatonic with an added 4th and b7th becomes D Mixolydian mode, which is also called the D dominant scale. D Mixolydian mode is simply the notes of G major but with the notes centering on D instead of G. Pentatonic and major scale patterns, including modal scales, are all covered in Fretboard Theory.

The third solo switches keys to E minor. The chord progression is now Em-C-B7-Am. Em-C-Am fit into the G major scale, but with the music centering on G’s 6th degree, E. This makes E Aeolian mode, better known as the E natural minor scale. You use a combination of E minor pentatonic and G major scale patterns. When the B7 is played, raise the 7th degree in the E minor scale from D to D#. The raised 7th makes the E harmonic minor scale. The harmonic minor scale and its use in taught in Fretboard Theory Volume II.

The fourth solo begins with a climb in the E harmonic minor scale and the use of a wah-wah pedal. Once you get to the 12th position, it’s straight E minor pentatonic from there.

Gear Setup
I used a PRS P22 with 57/08 pickups. The first three solos were played on the neck (bass) pickup and the last solo on the bridge (treble) pickup. I plugged into a PRS Custom 50 amp head and used the lead channel with the following settings (12 represents 12 O’clock). Volume: 3 Treble: 12 Middle: 12 Bass: 10 Master: 8 Presence: 12. I used a plate reverb on my Alesis MultiMix8 mixer. I used a Morley mini Wah/Volume for solo four. The amp head was plugged into a Rivera Silent Sister isolation cabinet with a Celestion Vintage 30 speaker and then miked with a couple of Shure SM57s. I use Dava Jazz Grips Delrin guitar picks. 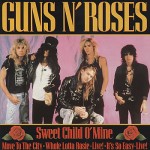