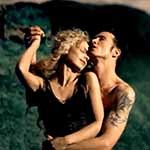 A Fretboard Theory customer recently asked me to shed some light on the verse to “Sour Girl” by Stone Temple Pilots. I remember a student bringing this song in to learn way back when it first came out in 2000 and I couldn’t figure it out. The STP guitarist, Dean DeLeo, has a knack for coming up with unique chord voicings and unpredictable chord changes. In fact, many music transcribers have been thrown off by his style, so much so that the official sheet music is inaccurate. Take a look at the score for sale at musicnotes.com and you’ll see that the chords notated for the verse don’t sound anything like the song. Fortunately, YouTube user bronyraur nails the Sour Girl chords and breaks it all down for you. You can also find the correct tab at SheetMusicDirect.

As for the music theory (my specialty) behind this verse chord progression, I see it like this:

These changes are based on minor scale intervals (hence all the flats) but played all as major chords, and can be thought of as a type of modal interchange. A lot of rock music features similar changes only with plain power chords.

Next, you add some chord tones and extensions to the basic chords listed above. But, before you do, play an open C major chord. C major is built from the notes C, E and G. In the open position you can combine these notes in a few different ways. Obviously, you can play a standard open C chord shape. With this shape, you can also play G at the 3rd fret of the 1st string using your pinky finger. This is still a C chord, it’s just a slightly different voicing with the 5th, G, on top. You can also put an alternate note in the bass position. Move your 3rd finger from C at the 3rd fret of the 5th string to G at the 3rd fret of the 6th string and mute the 5th string. Again, this is still a C chord, just another voicing, although it is technically named C/G with the slash used to indicate a note other than the root in the bass.

I also found a live version of “Sour Girl” in which you can catch some glimpses of DeLeo’s fingerings, however, it sounds like the band is tuned down a half-step to Eb. 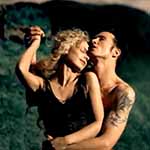