If you’re familiar with using pentatonic and major scale patterns to play guitar riffs and solos, you know that, in some cases, notes fall outside of both types of scales. This is especially true in blues and blues-influenced styles of music including pop, rock, country, and jazz.

So, what’s happening in these situations?

A popular blues technique involves mixing major and minor pentatonic scales along with the fifth mode of the major scale, Mixolydian. In fact, the technique of mixing scales is so common that any guitarist who is serious about playing popular styles of music must understand it and be able to do it.

To help you get a handle on this essential guitar technique, I put together a mini course called Soloing with Mixed Blues Scales. In this four-step guitar lesson, you see *exactly* how different scales are applied and mixed to make the blues sound we all know and love.

The four steps include:

You get over 30 minutes of video instruction along with neck diagrams, tab, and a backing track. You even get Guitar Pro files if you are a user of the guitar notation program.

After completing Soloing with Mixed Blues Scales, you will know how to compose tasty lead lines that mix major tonalities, minor tonalities, and chromatic passing tones. And you’ll finally be able to make sense of all those blues solos and rock riffs you have learned that appear to be all over the place.

This four-step lesson is simple, to the point, and something you can easily finish in one practice session–yet it will radically change the way you hear music and view the fretboard. Best of all, you can add incredible variety and versatility to your playing by completing this mini course for FREE! Get started now! 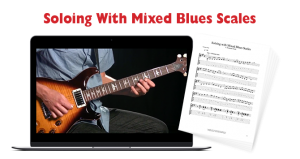