Is it Always Necessary to Use the Pinky Finger?

Home Blog Is it Always Necessary to Use the Pinky Finger? 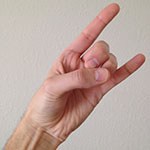 Is it Always Necessary to Use the Pinky Finger? 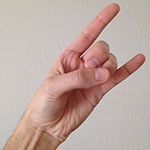 Obviously the pinky comes into play a lot in guitar playing and in certain situations, such as fretting chord shapes, it’s necessary to use it. But when it comes to lead guitar playing, many guitarists find themselves favoring a three-fingered approach, especially when using close position patterns like the pentatonic scale and playing styles of music such as blues and classic rock. I often receive questions about whether or not it’s appropriate to take this fingering approach in these situations. The line of reasoning behind these questions is that, although our playing may sound right, we may be doing it wrong. Here’s my opinion.

First off, if the description above matches you, then you’re in good company. Many great guitar players, including Jimi Hendrix, Eric Clapton, Eddie Van Halen, Stevie Ray Vaughan, and Eric Johnson are known for a lot of three-fingered guitar playing, particularly in their minor pentatonic-based lead guitar solos. In fact, many of these famous guitarists also used their thumbs on the fretboard by wrapping them around the neck, which has traditionally been considered a big no-no. Indeed rules were meant to be broken.

The truth is, no rule exists that says you must always take a four-fingered approach, and in many situations a three-fingered approach is sufficient. For example, many guitar players find that the first three fingers of the fretting hand are stronger and more dexterous than the pinky, and so prefer to use fingers 1-3 in situations where hammer-ons, pull-offs, slides and bends are involved. Additionally, so much can be played with three fingers that often it’s just not necessary to always get another finger involved. Heck, jazz guitarist Django Reinhardt, whose third and fourth fingers were paralyzed after an injury in a fire, proved that you can still play a lot, and play well, with only two fingers! It seems that one’s success on the instrument is not necessarily a matter of following some kind of fingering convention.

When it comes to playing guitar, you must choose fingerings that allow you to play your best and accomplish your goals. If there are parts that you’re most comfortable playing using primarily three fingers, and you play them well and sound good, then there’s no reason not to play them this way. If you do better by getting your pinky more involved, then go for it. Whatever you do, don’t get into the line of thinking that you’re “supposed” to use a certain kind of fingering. You’re supposed to play well and sound good, and this isn’t always accomplished in the same manner for everyone.

On the other hand (no pun intended), when it comes to the rock and roll hand sign (a.k.a. Sign of the Horns), using the pinky is a must! \m/