Riders on the Storm Chords, Tab, Modes and Theory 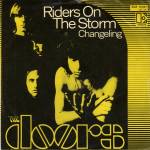 Riders on the Storm Chords, Tab, Modes and Theory

“Riders on the Storm” by The Doors is a good example of Dorian mode and modal interchange. The song begins in the key of E minor, but with notes and chords relative to D major, which produces E Dorian mode. In the PDF guitar tab below, which is a guitar arrangement based on my own interpretation, you can see E-Gt 1 playing a bass line that outlines Em and A chords. These chords are ii and V from the D major scale. If you want to count from the tonic chord, Em, then it’s a i-IV chord progression (that’s a minor one-chord and a major four-chord). Use D major scale patterns over this progression to produce the E Dorian mode sound. You can also simply play E minor pentatonic.

Riders on the Storm guitar tab

Starting at bar 5, the chord progression focuses on A, but this time Am, not major. The music has changed keys here, using notes and chords now relative to G major. Am and Bm are the second and third chords in G major. So this section can be considered a temporary usage of A Dorian mode. Use G major scale patterns over it to produce the A Dorian mode sound.

Bars 9-10, chords D and C, can also be thought of as belonging to G major.

The relative minor to G major is E minor, which is also known as the natural minor or Aeolian mode. So this song is borrowing from two modes, E Dorian (D major scale) and E Aeolian (G major scale). Having a piece of music center on one primary tonic chord while changing modes like this is called modal interchange. Modal interchange is also sometimes called modal mixture and is covered in my Fretboard Theory video course.

One more thing to point out, the bass line at the beginning is outlining the chords Em-A, but the second guitar, which is based on the keyboards in the original recording, is playing pieces of the chords D-Em. That’s part of a D chord while the bass is playing part of an A chord. Though it doesn’t seem right, it sounds great to me! 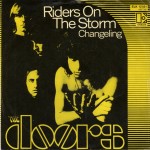