Reeling In the Years Chords

Reeling In the Years Chords

“Reelin’ In the Years” by Steely Dan is probably best known for its electric guitar solos but the chords played on the keyboard are a great example of using diminished chords and voice leading. Guitar players can learn a lot from these chord changes.

The song opens with a lead guitar solo played over the basic chord changes G-A. It’s the A chord that functions as the tonal center of the music and so most musicians would say that the song is in the key of A.

Mixolydian Mode
G and A are actually chords IV and V (4 and 5) from the D major scale. So this song is in a mode, the fifth mode Mixolydian. Listen carefully to the guitar soloing that occurs over these changes during the song and you’ll notice that it features notes of A Mixolydian mode, also called the dominant scale, which is really D major. Often A major pentatonic scale patterns are used, which feature notes still relative to D.

Chord Voicings
The voicings of these chords, that is, the way that the notes are stacked, is critical in order to get the proper voice leading effect that these chords are obviously based on. See my PDF Reeling In the Years Chords for notation and guitar tab. 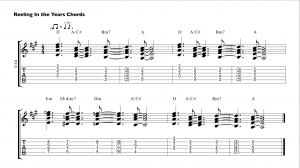 In the guitar tab, you can see that the first set of changes, measures 1-2, follows the D major scale backward from D C# B A. This is a type of diatonic voice leading because the chord roots are leading right down the scale.

The next set of changes features half-step chromatic voice leading using the notes E Eb D C#. You see this in the chord roots that move along the 5th string. By fret number they go 7 6 5 4. In addition, there is voice leading occurring on the 2nd string with the notes G Gb F E. By fret number they go 8 7 6 5. More often than not, when you come across chords that are both non-diatonic, that is, out of key, and based on chromatic half-step movement, voice leading is at play. In these cases, the purpose and goal of the chord changes is the chromatic movement.

I could not find these chord changes notated properly on any free guitar tab website. I think it’s the use of diminished chords, chord inversions and voice leadings, plus the fact that these chords need to be drawn from the piano figuration in the song, that make the chords difficult for guitar players to identify. But, now you know!

Get the full Reelin’ In the Years Steely Dan Digital Sheet Music. 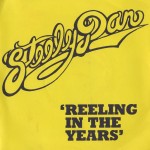