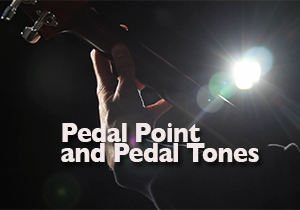 A pedal point in music is a sustained or repeated note sounded against chord progressions and melodies. Pedal points are also called pedal tones and simply, pedals. The term originates from organ music where the player sustains a low tonic or dominant pitch with the foot pedals allowing them to easily play chords and melodies above this note on the keyboards. In its simplest form, a pedal tone is a sustained or repeated note in the bass register on the tonic or dominant pitch that supports a melodic line. You get to know pedal tones and pedal point in Fretboard Theory Volume II Chapter 10.