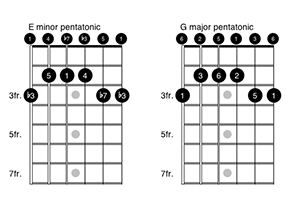 In the open position, pentatonic scale pattern one produces what most guitar players call the E minor pentatonic scale. It’s played over some type of E minor chord (or sometimes E major in a blues setting). The minor tonality is produced because the scale has a minor 3rd in it. The minor 3rd occurs between the primary pitch, E, and the note G. But the very same notes and pattern also make the G major pentatonic scale. All you have to do is play the scale over some type of G major chord. When the note G becomes the primary pitch in the music, then the B note in the scale becomes a major 3rd and produces a major tonality.

In the neck diagrams above you see the same pentatonic scale pattern shown in its two forms, minor and major. You can use these notes to play over music that has either an E minor or G major tonality. In its minor form, the E note is counted as 1. In its major form, you count G as 1.

The songs listed below are just some of many examples that use the pentatonic scale in its major form. In all of them, the scale is played over major chords and the second note in pattern one is functioning as the tonic (primary pitch).

This is just one of the many benefits to learning guitar theory and how music works. The better you understand the features and functions of your musical tools, the better you’ll develop as a guitar player. To learn more about using the pentatonic scale, see my video course, Pentatonic Scale Patterns: How to Easily Master the Patterns Used to Play Music’s Most Iconic Guitar Riffs and Solos. It’s also part of my full Fretboard Theory guitar theory program.