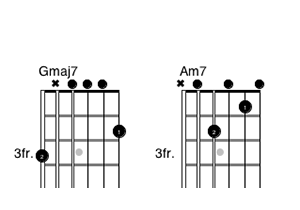 At their core, major and minor chords are built from triads which consist of root, third and fifth (1 3 5) intervals. These intervals are derived from the major scale and named according to their scale degree. Other notes, or extensions, from the major scale can be added to chords such as seconds, fourths, sixths and sevenths (2 4 6 7). Adding extensions creates more complex chords with richer sounds. This free guitar lesson will give you a quick introduction to this topic and how to apply this music theory principal to the fretboard and popular songs.

Major Scale Patterns and Chord Progressions
Before you begin to study extensions you should first learn how to build major and minor chords (triads) from the major scale. This would include guitar chord progressions and playing by numbers. You might even need to take a further step back and learn major scale patterns. Remember, each guitar music theory topic builds on the one before it. Major scale patterns and building chords are two topics that are foundational to understanding and applying chord extensions.

Chord Building Theory
If you’ve already been through the process of building chords for the entire major scale, then you’re ready to start adding chord extensions. All you have to do is repeat the whole process, but this time add an additional interval to the triad. For example, a seventh interval ( or 7). Starting on a G note in the key of G, 1 3 5 7 are G B D F#. The F# note is a major seven interval and is just one note shy of an octave. Any time you add an F# to a G major chord you create a G major seven chord (or Gmaj7). This can be done with any G major chord shape in any position, and any F# note regardless of the octave. You’ll have to rearrange your fingers in order to accommodate this extra note.

Next, add a seventh interval to the ii chord in the key of G, A minor. To do this, count the notes of the G major scale STARTING ON A. If you do this correctly the seventh note away from A is G. This interval is called a flat seven because it’s one fret less than a major seven (or two frets shy of an octave). When you add a G note to an Am chord you create an A minor seven chord (or Am7). This can be done with any Am chord shape in any position, and any G note regardless of the octave. You’ll have to rearrange your fingers in order to accommodate this extra note.

Now that you have identified the seventh interval for the first two chords in the key of G you can continue the process with the rest of the scale. If you do this correctly the following sequence should emerge:

Dominant Seven Chords
The V chord, D7, is unique in that it’s a major chord but it has a flat seven interval like the minor chords. Because of this it has special name which is “dominant” seven. For some strange reason, it’s the dominant seventh chord that is written simply as “7.” The major seventh chord must always include “major.”

As with any music theory topic you learn about, you must apply extensions to the guitar fretboard by playing songs. The follow lists will help to get you started by naming some well-known tunes that use seventh chords.

This brief article is merely an introduction to adding seventh intervals to chords. Because there are so many different ways to make major and minor chord shapes on the guitar fretboard, there are many ways to build chords with sevenths too. In fact, the whole CAGED chord system can have seventh intervals added to it. Once you get a handle on extending chords with sevenths, you can try adding seconds, fourths and sixths. From there, you can get into chords with multiple intervals added, but don’t get ahead of yourself. At least with this newfound guitar theory knowledge you can now begin to understand what those numbers next to chord names are for!