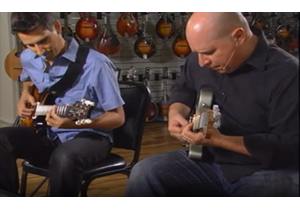 I was delighted to be a guest on Live Lessons With Steve Krenz on May 12, 2015. Steve and I broadcasted out of the legendary Gruhn Guitars in Nashville, Tennessee. I shared the story of how I got into music publishing, discussed my approach to modes and music theory, and announced the release of my new book, Guitar Rhythm and Technique For Dummies. We had fun jamming and giving away a few prizes too. To watch a replay of the video stream, click live Lessons with Desi Serna. ​Below you find details for one of the program’s featured lessons.

Guitar Lesson
The featured guitar lesson is a jam based in the key of E minor. The chord changes are Em7add2-Gmaj7-Asus2-C-B7. Follow along using the free tab and neck diagrams below.

Using Guitar Scales
Since the primary chord in this progression is Em, you can solo over the chord changes using the E minor pentatonic scale. Because the chords are drawn from the full E minor scale, you can use it too (the E minor scale, which is also known as E Aeolian mode and E natural minor, is relative to G major). Finally, the B7 chord at the end of the progression features a D#, and you can follow this with your scale by raising the 7th degree of E natural minor from D to D# creating the E harmonic minor scale.

For Dummies Guitar Books
To learn more about Desi’s books from Wiley, see Guitar Theory For Dummies and Guitar Rhythm and Technique For Dummies.

To promote my new book, Guitar Rhythm and Technique For Dummies, I’m giving away a PRS guitar and other gear prizes! Click the image above to enter for a chance to win.