Bedrock Guitar Theory of the Pros Lesson #6: Navigate the Neck Like a Pro

Home Bedrock Guitar Theory of the Pros Lesson #6: Navigate the Neck Like a Pro

Perhaps you never thought of it this way, but with a combination of vertical frets and horizontal strings, the fretboard is essentially a grid.

With its horizontal strings and vertical frets, the guitar fretboard is a grid as seen in the diagram above.

In fact, you can build chords, compose chord progressions, and determine correct scales to play simply by relating to shapes and patterns, with little or no regard to key signatures, notes, sharps, and flats.

Even if you take the traditional route of thinking, you still have to translate the music concepts to the fretboard and connect the dots, so to speak. This is why guitarists usually prefer to make use of guitar tablature and neck diagrams over standard notation.

Without giving much thought to the notes they contain, it’s easy to see how this guitar chord shape and scale pattern fit together.

Have you ever wondered how it is that so many pro players don’t read music and have no formal training, yet music makes complete sense to them on the fretboard?

It’s because the fretboard is the real battleground and ultimately what matters most. If you want to understand music as it pertains to guitar playing, then you need to develop a proper fretboard perspective.

Getting to Know Fretboard Notes

Many guitar players set out with a goal to memorize all the notes on the fretboard. While this isn’t such a bad idea, and it can help in some situations, it’s really a distraction from a much more needed skill: visualizing shapes and patterns.

This doesn’t mean that you can completely disregard notes. You still need to make a connection between shapes and patterns and notes to some degree. What most guitarists do is memorize the notes along the sixth and fifth strings because these strings are where most shapes and patterns originate. Octave shapes are used to trace notes on other strings back to the sixth and fifth strings where the note names are then identified.

Guitarists typically trace everything on the fretboard back to the notes along the 6th and 5th strings.

Chords On the Fretboard

Getting into the details of guitar chord construction involves learning about major scales, intervals, triads, arpeggios, and chord tones and extensions. All of these musical elements are worked out on the fretboard in the form of shapes and patterns. Guitarists, more so than most other instrumentalists, know a chord by its shape rather than by its notes.

Scales On the Fretboard

Getting into the details of guitar scales involves learning pentatonic and major scale patterns, which are the base patterns guitar players rely on even when other types of scales are in use. Guitar scales and modes are worked out on the fretboard and related to chords and progressions all in the form of patterns. Guitarists know scales more so by their patterns rather than by their notes.

Progressions On the Fretboard

When it comes to how chords relate to one another and how chords combine to make progressions, once again patterns and fretboard visualization come into play.

Want to take steps to learn the fretboard better and navigate the neck like a pro right now? You can watch the whole first chapter in the Fretboard Theory video series FREE! In this chapter, I show you the best way to learn the notes on the fretboard.

When you finish this free video lesson, you can continue with the rest of the Fretboard Theory instruction at the link below.

With Video Lessons Based on My Bestselling Books “Fretboard Theory 1 & 2”, You’ll Master the Fretboard and Play Like a Pro Faster Than You Ever Thought Possible

Today, I’m going to help you quickly learn what it takes to become an advanced guitar player, and even improvise and compose music of your very own, without all the wasted time, effort, and energy of traditional methods. If you take this opportunity to let me show you, I promise you’ll be able to learn guitar theory and play like a seasoned pro more easily than you ever thought was possible.

Are you ready to be amazing?

If so, join me, and master the guitar today. 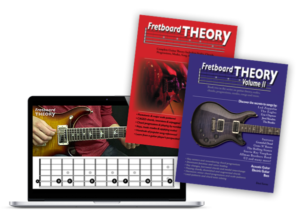