Why the Guitar CAGED System is Not Bad For You 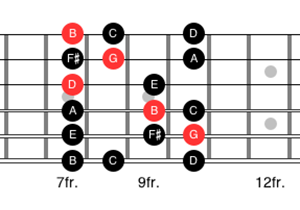 Why the Guitar CAGED System is Not Bad For You

There is a lot of talk going on about whether or not the so-called “CAGED system” is beneficial or detrimental to a guitarist’s development and progress. Detractors say your playing will be stuck in a cage and you can’t play fast with the system. In this free guitar lesson you get to know what this CAGED idea is all about and you explore the pros and cons of its different uses.

In the world of guitar, CAGED refers to the five basic chord forms played on the neck. If you know the basics of guitar playing already, then you’re familiar with the chords C, A, G, E, and D in the open position (that is, at the end of the neck near the nut and utilizing some open strings). In addition to these shapes being played in the open position, they are also moved around the neck to form chords for different root notes in other positions. Of course, some adjustments need to be made when you move away from the nut–without the open strings you must barre with your index finger (creating a new nut) and then build each CAGED shape with your remaining fingers. Barring and fingering CAGED chord shapes in this manner is rather difficult, but luckily there’s more to it than that. Rather than play the chord shapes in their entirety, most players reduce them to more manageable pieces, usually creating more pleasing chord voicings while they’re at it. To learn more about this approach to building chord shapes on the fretboard, see my page Playing Guitar Chord Shapes, Inversions, and Voicings with the CAGED System.

Another way in which the CAGED system is used is as a means to arrange scale patterns on the fretboard, and this is where the controversy lies. With this system, each of the five chord forms has a corresponding scale pattern, as you see below in Figure C1 using the key of G. Wherever you are on the neck, you identify the underlying chord form and play within its corresponding scale pattern. This is not a bad way to map out scale tones across the neck, however it’s important to know that it’s just one way to do it, there are other approaches you ought to learn, and these other approaches often lend themselves better to certain techniques and styles. 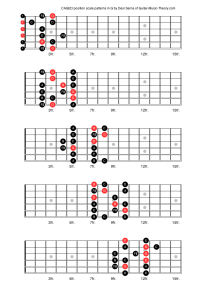 Figure C1: With this group of five major scale patterns, all the notes are G major scale, and the red colored notes outline the basic shapes of the corresponding CAGED forms (starting in the middle of the system on G since this is the key of G). Click to enlarge.

The CAGED system forms five patterns in five positions on the neck. These patterns feature a mixture of two- and three-note-per-string fingerings as you see in Figure C1 above. Sometimes the inconsistency of the patterns negatively effects your fingerings and picking efficiency.

Another option is to arrange scales on the fretboard using patterns that always feature three-notes-per-string. In this case, seven patterns are formed. See Figure C2 below, which features the same G major scale notes as the previous figure, but this time with the scale tones divided up into patterns with three notes on each string. These are the very same patterns that you would pay a CAGED critic to teach you. Learn them here for free. 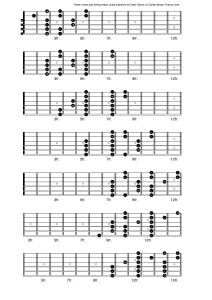 There are even more possibilities than what you see in the previous two figures. Without getting into all the details, I’ll give you just a few more examples that make my point. You can arrange scales using two-notes-per-string. You can use a combination of three- and four-notes-per-string. And let’s not forget that you can move horizontally up a single string too. See examples of all these options in Figure C3. 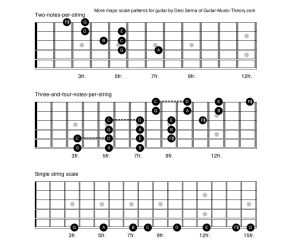 So is the CAGED system–as a means to arrange scales on the fretboard– bad or not? My answer is, it depends on how you use it. Confining yourself to only CAGED position patterns is an unnecessary restriction that may have a negative effect on your playing. If, however, you view the CAGED patterns as simply one option, and opt for other ways to arrange scales when needed, then you won’t hold yourself back. Furthermore, some players prefer the CAGED system because the patterns are arranged in a manner that happens to work best for their hands. For them, using other types of patterns poses problems and holds them back. This might be you. So the bottom line is that you ought to explore your options and go with what works best for you.

In regard to the various articles and methods you see expounding the pros and cons of using the CAGED system as a means to arrange scales on the fretboard, I have a few pieces of advice.

A few final points to consider, especially if you came here after reading someone’s criticism of the CAGED system, are:

Quotes From Other Guitar Instructors About Using the CAGED System

“The positions are just a means to an end. As we get better at the guitar, I believe the real goal is to transcend scales and work on building a connection between our ears and the guitar. Scales help us to find the notes on the neck, but all too quickly everything becomes visual which has the effect of cutting out the musical part of creativity. While CAGED is a useful map, and a great way to memorize scales and modes, I think it is a stepping stone more than anything else.” -Joseph Alexander, Fundamental Changes

“The CAGED system is a nice way for beginners to intermediates to see the fretboard in context. Getting locked into the CAGED system will have its disadvantages I am sure, but I think most guitar players know when to seek alternatives and will probably be curious to explore other options anyway. To criticise the CAGED system makes as much sense as criticising the 12-bar blues. You can choose to stay locked into that one progression or you can step out and explore other possibilities.” -David Hart G4 Guitar Method

In his Premier Guitar magazine article, Beyond Blues: CAGED Developments, London-based guitar player, teacher, and transcriber, Levi Clay, says, “Generally, the most vocal arguments come from those who don’t actually understand how the system works. That would be like me saying flour, water, yeast, and salt can’t help hunger because I never learned how to bake bread.” He also adds, “It’s incredibly important to remember that knowledge can never harm you. You can learn about anything and then decide it isn’t relevant in your day-to-day life.”

For the record, as an author and publisher of books and videos that teach, among other things, scales patterns, I do not teach the CAGED system as a means to arrange scales on the fretboard. As I mention at the beginning of this article, I teach players how to use pieces of the CAGED chord forms around the neck to play different chord voicings, inversions, fragmented chords, and barre chords. I relate this to popular rhythm guitar parts as heard in songs like “Tears in Heaven,” “Stairway to Heaven,” “Jack and Diane,” and many others. In my book and video course Fretboard Theory Chapter 3 CAGED, I do not teach a single scale pattern. It’s all chord shapes and rhythm guitar parts. In my book, Guitar Theory For Dummies, I use the CAGED system only as a method for building chord shapes.

Regarding the teaching of scale patterns, I teach the five pattern variety with two- and three-notes-per-string, and the seven pattern variety with three-notes-per-string. I mention that the five pattern variety can fit together neatly with the five CAGED chord forms, but I warn against always making this association. I also warn against guitarists unnecessarily restricting themselves to any position or pattern, and I encourage them to explore their options. In Volume II of my Fretboard Theory book and video series, I teach the method of basing all lead lines in pentatonic patterns and then adding scale tones, like 2nds and 4ths, as well as the method of visualizing CAGED chord forms over scale patterns in order to target chord tones while soloing. I do not prescribe any of these approaches as the “correct way,” but rather present them all as useful options worth exploring. Ultimately, it’s up to each individual player to explore his/her options and settle on the approach or approaches that work best.

One final thought… While you don’t want to unnecessarily restrict yourself to any one type of scale pattern, you don’t need to spread yourself out all the time either. Playing well isn’t about how much fretboard you cover. You explore your options in order to find the positions and patterns that work best for you. It’s perfectly OK to favor particular positions and patterns and use them most or all of the time–a lot of guitarists do this, including me and many of the guitar icons you know and love.