In what key is “Comfortably Numb” by Pink Floyd?

Home Blog In what key is “Comfortably Numb” by Pink Floyd? 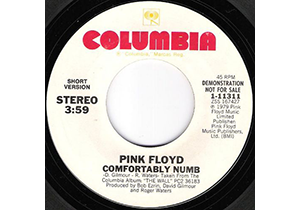 In what key is “Comfortably Numb” by Pink Floyd?

Pink Floyd’s song, Comfortably Numb, features chords that don’t fit together into any one major scale, causing many guitar players to wonder which key it’s in and why the chords work together. Here you see how each song section breaks down, where the chords come from, and what scales to play.

Verse Bm-A-G-Em
The verses are straight out of the B minor scale, moving backward from Bm to A to G, skipping F#m and ending on Em before repeating. By number these changes are i-bVII-bVI-iv. That’s “one, flat-seven, flat-six, four” in case the Roman numerals are throwing you off. You might better understand these chords by viewing them as being in the relative major, D. In this case, Bm is the vi chord (six chord) and the whole progression is vi-V-IV-ii. That’s “six, five, four, two.”

“There is no pain you are receding” D-A (1:22 in the embedded YouTube video)
This next section changes from B minor to the relative major, D. D-A is I-V (one, five). You can continue playing the same scales as before, but now your focus has shifted from B to D. B minor pentatonic is also D major pentatonic.

“You are only coming through in waves” C-G (1:37)
This is where guitarists get thrown off. Where does the C chord come from? Well, it doesn’t come from the key of B minor/D major because B minor/D major features a C# note, not a C natural that is needed for the C chord. So, something is different here. What’s actually happening is a key change and many musicians would view it as the composition technique called modal interchange.

Modal Interchange
Modal interchange, or modal mixture, is when notes and chords from parallel scales are combined. Parallel scales are different scales that both start on the same pitch. One of the most popular ways in which this occurs is the mixing of Ionian mode (the plain major) and Mixolydian mode (a major scale with a flattened seventh). Using D as your starting point, the two scales look like this:

In the key of D major the three major chords are D, G and A, which together make the typical I-IV-V chords of a key. In the key of D Mixolydian, the three major chords are D, G and C which are actually I-IV-V from the G major scale (specifically D-G-C is V-I-IV in the G scale), but when renumbered to reflect the modal starting position of D become I-IV-bVII. The main difference between D major and D Mixolydian is the flat seven chord, C. Since major and Mixolydian are two popular major key types, you sometimes see composers mix them together. This means that you get a total of four major chords: I-IV-V from the major and bVII from Mixolydian. In the key of D this becomes D-G-A-C, or I-IV-V-bVII. Another way to think of this is that you’re borrowing the C chord from the parallel scale of D Mixolydian. Borrowed chords and modal interchange mean the same thing.

Scales to play: When playing over a song that mixes two different scales you have a few options when it comes to scales.

David Gilmour himself opted to use the full D major scale, and then mostly avoided the C# during the C chord, except at 3:02 when he included the C natural. The closing lead guitar solo is played over the original progression Bm-A-G-Em and mainly sticks to notes from the B minor pentatonic.

So you now see that “Comfortably Numb” is primarily based in the D major scale with some focus on the relative minor, B minor, but then borrows from the closely related D Mixolydian scale which adds another major chord into the mix (as well as a b7th into the lead line).