How to Play Over “Cocaine” By Eric Clapton With Modal Scales 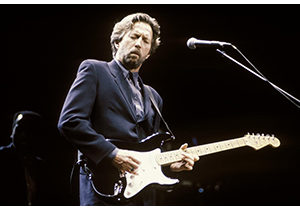 How to Play Over “Cocaine” By Eric Clapton With Modal Scales

There are actually a couple ways to play over “Cocaine” by Eric Clapton. Generally, Clapton treats it as minor in both his vocal melody and guitar solo, opting for strict minor pentatonic, no guitar modes. But in this live version at 2:53, Clapton treats the progression as ii I in D producing E Dorian mode. You can clearly hear him playing the full modal scale.

Because the root chord in the “Cocaine” progression is played as a power chord (root and fifth, no third), it could be treated as either major or minor. At 4:40 in this same live recording, Clapton’s sideman, Albert Lee, incorporates E Mixolydian mode, playing over the progression as if it were E major to D (V IV in A).

“Cocaine” is a good example of how sometimes a chord progression can be so sparse that you can actually fill in the blanks a couple different ways. Another option is to treat the progression as vi V in G producing E Aeolian mode. It’s only in circumstances like this that you can “choose” the mode.