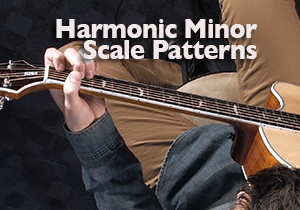 I introduced the harmonic minor scale to you in Chapter 3 of Fretboard Theory Volume II where we looked at the dominant function and minor chord progressions with a V7 chord. In Chapter 9 we will pick up where Chapter 3 left off, teaching you harmonic minor scale patterns and how to use this scale for improvisation. Be sure that you have completed Chapter 3 so that the material we work with here will make sense.