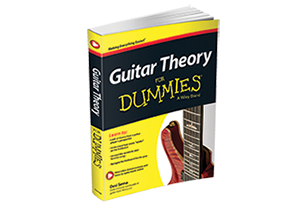 In addition to my own self-published guitar theory book, Fretboard Theory, I have authored a book for the world-renowned For Dummies series from Wiley titled Guitar Theory For Dummies. Because I’m not the publisher of this title, I don’t control distribution, pricing, or sales. Instead, this title is sold in bookstores around the world, at various online retailers including Amazon.com, and in various digital formats.

Like Fretboard Theory, Guitar Theory For Dummies teaches music theory for guitar in a practical, hands-on fashion that emphasizes the guitar fretboard and popular music. You work with important components of music including scales, chords, progressions modes, and more. You learn how music works and how different elements of music go together to make songs sound great. I make reference to popular songs throughout the book so you can connect what you learn to familiar music. You learn the inside secrets to songs by The Beatles, Chuck Berry, Eric Clapton, Jimi Hendrix, Led Zeppelin, the Eagles, Dave Matthews, John Mayer, and more. You develop a better understanding of the music you listen to and play, plus improve your compositional and improvisational skills. The book also features bonus online articles, audio tracks, and video clips.

Here’s a video trailer for the book:

“What’s the difference between Fretboard Theory and Guitar Theory For Dummies?”

If you have already started one book (Guitar Theory For Dummies versus Fretboard Theory Volumes I and II), finish it. There’s no need for the other. The best next step after finishing either title is to enroll in a video course by choosing an option from the homepage.

How to Order Guitar Theory For Dummies


Books only are also available for Barnes and Noble Nook, Apple iBooks, and Google Play.