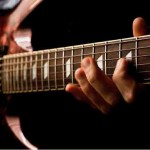 How to Learn Guitar Major Scale Patterns
Guitarists of all levels play melodies, riffs, lead guitar solos and bass lines using major scales. The notes of the major scale cover the whole fretboard. To learn this scale template, players break it up into smaller pieces. In this article I’m going to explain to you how this process works and address common issues concerning patterns, fingerings, picking and transposing.

Major Scale Patterns
When learning the major scale, players break up the notes into positions or patterns. Usually this is done with five pieces but there are other ways to do it. It really doesn’t matter how you break up the whole major scale template as long as you can put the pieces together and complete the whole guitar fretboard. Also, different major scale patterns are not different scales. They’re the same notes in different positions.

In the guitar fretboard diagrams below, you can see how to play guitar major scale patterns. The first diagram shows you all the notes of G major across the whole neck. The remaining diagrams show you the five patterns that guitarists commonly use. The numbers represent the scale intervals 1-7 with 1 being the tonic, G. Click on the image to enlarge. 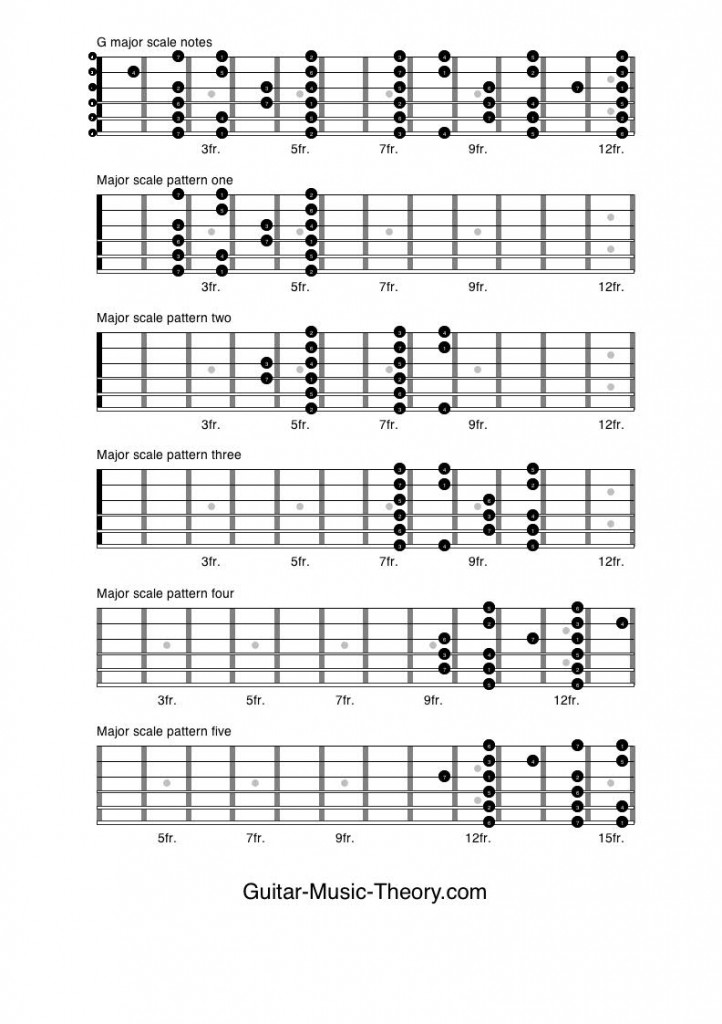 Memorize Scale Patterns
As you learn major scale patterns be sure to focus on only one at a time. Visualize the pattern on the fret board and play up and down it until you have it completely memorized and your fingers know where to go without thinking. You don’t need to start or end on the root, but rather touch on every possible note available in the position you’re covering.

Major Scale Fingering
There are no correct or perfect ways to finger major scale patterns, but there are some bad habits to avoid. Don’t do something silly like play through a whole pattern with only one or two fingers. This will make you look and sound like a hack. God gave you several fingers for a reason. Use them! Try to get three or four fingers involved. You should be able to cover a position by keeping your hand still and then reaching with your fingers. It’s good to settle on something and then be consistent as you practice, but you’ll no doubt use other fingerings when you start actually playing music especially when techniques such as slides, hammer-ons, pull-offs and bends are involved. So, as you finger these patterns you can use one finger per fret, just your first three fingers or any other combination that works well for you.

Alternate Picking
While you’re at it, alternate your pick. You’ll spend a lot of time rehearsing major scale patterns. Don’t reinforce a negative habit by plunking through everything with downstrokes. Kill two birds with one stone by developing alternate picking technique while you learn scale patterns. Choke up on the pick, keep your hand planted on the guitar and alternate continuously without skipping or repeating any strokes. Be sure to rest your hand just above the string you’re picking. As you move across the strings, your hand should slide over and rest upon the strings you’re not playing to keep them quiet.

Reference Chord
Every time you learn something new on the fret board you should try to peg it to something familiar. This is the key to developing a good working knowledge of music theory especially when applying guitar theory to the fret board. You can apply this pegging idea by associating major scale patterns to reference chords. For example, pattern one (as it’s usually taught) can be played right around an “E form” barre chord. Pattern four fits together with an “A form” barre chord. If you know how to navigate the fretboard with chords, and you associate them to major scale patterns, then you’ll be able to instantly jump into the major scale in any position. To learn more about chord forms look up the guitar CAGED chord system.

Connecting Major Scale Patterns
After you complete a pattern, move to the next position and repeat the whole learning process with the new pattern. After you memorize a new position go back and review the others before it. Continue with this process until you’ve covered the whole fretboard. Then, practice connecting the patterns in both directions across the neck. In other words, connect pattern one to pattern two, two to three, three to four, four to five, then reverse yourself by connecting pattern five back into pattern four, four into three, three into two, and two into one. You may have room to move backward from the pattern one you started at. Try it.

As you move from one pattern to the next, notice how a portion of each is reused in the new position. Visualizing how these pieces connect is the key to navigating the fretboard.

You learn all about music theory for guitar, including scales, chords, progressions, modes and more, in myFretboard Theory guitar theory program.