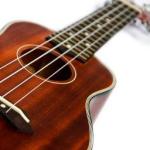 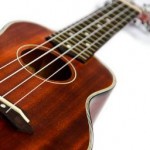 I occasionally get asked if I offer any music theory for ukulele. I don’t. In fact, I haven’t even played a ukulele much. But recently a ukulele player sent me this message about using the scale patterns and chord shapes taught in my guitar theory book, Fretboard Theory, for the ukulele.

Not sure how familiar you are with the ukulele, but I found this really interesting. I recently received a uke as a gift and wanted to learn some of the basics. After a few minutes of screwing around I realized I already knew a lot. Thanks to Fretboard Theory, and the CAGED system in particular, I was already able to play hundreds of songs. A ukulele is tuned G-C-E-A, the same notes as the bottom four strings of a guitar at the fifth fret! Thanks to the time I spent learning all the different chord voicings and scale patterns in your system I am able to play most of the songs I already know on guitar on my new ukulele. For example, the standard G chord on a ukulele is the same as a partial D-form G chord on a guitar. The D chord on a uke can be played by barring the G-C-E string at the second fret, which is essentially the same as a partial A-form D chord. I think it’s really awesome how easily the theory applies. The G string is higher in a standard ukulele, so it sounds a little differently, and there are some other differences, but the same basic theory can be applied.”

So I guess my guitar instruction can work for uke, if you work it out on guitar first.

Have you applied my instruction to an instrument other than the guitar? Leave me comments below.