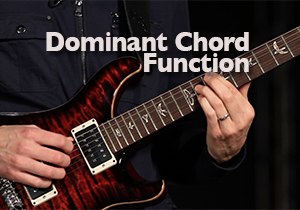 In music we think of chords leading from one to another, rather than just being some random list. We naturally describe this phenomena by calling a group of related chords a progression. A basic chord progression is I-IV-V-I. We think of the I chord moving to IV, which in turn moves to V, which finally leads back to I. Each of the chords in this progression has a particular function. The chord function on V is incredibly important in music. Since it is built on the fifth scale degree, also called the dominant note, it has what is sometimes called a dominant function. In a chord progression like the one above, the dominant chord has a sense of movement, or instability, that makes the progression want to continue on leading back to the I chord. This leading quality of V is intensified if a seventh is added to the chord, making V7. We also call this chord a dominant seventh chord. Every major scale has a naturally occurring V7 chord. For example G7 in C major, D7 in G major and A7 in D major.

The tonic/dominant relationship in music is so strong that composers sometimes use a dominant functioning chord on ones other than the tonic, like on the ii chord, or perhaps even the V chord itself. These chords are called secondary dominants. You will recognize them in chord progressions as a major chord when you are expecting a minor one, and especially a dominant seventh chord when you are expecting a simple triad. As an example, look at the C major progression: C-Am-Dm-G7. A common variation on this progression is C-Am-D7-G7. We would normally expect a D minor chord rather than a D7 chord in C major. But if we think a little bit about this progression, we can see that the D7 chord is the dominant seventh of G.

In Fretboard Theory Volume II Chapter 3 you learn all about dominant chords, how they function, and how they are used on chords other than the tonic chord. You get to know various chord progressions that make use of dominant function and secondary dominants, plus see references to many familiar songs. In addition, you also learn when to raise the seventh scale degree in a minor scale or mode, and how that relates to the dominant chord and harmonic minor chord progressions. As an added bonus, you get introduced to the concept of voice leading, which will help you understand why seemingly unrelated chords fit together so well.