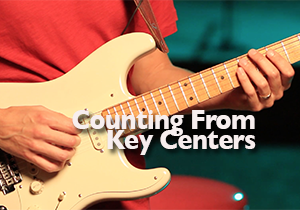 In Fretboard Theory Volume II Chapter 2 we will look at using a new number system, one where we number keys and chord progressions by starting from the tonic pitch (key center) rather than using the numbers as they occur in the parent major scale. Counting from key centers like this reveals important details about keys, scale formulas, chord movement and harmony. We cannot advance to higher forms of music theory without first laying this groundwork. Many of the advanced concepts we explore in other Fretboard Theory Volume II chapters, like dominant function, modal mixture, and the harmonic minor scale, necessitate that we think and count from key centers.