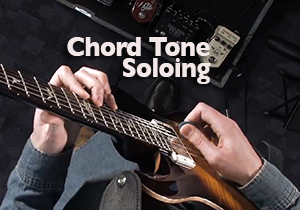 In Fretboard Theory Volume II Chapter 8 you are going to learn how to use CAGED arpeggio patterns to target chord tones while using pentatonic lead patterns. Specifically, you will target the root, third and fifth of each chord as you work through a progression. Targeting chord tones helps you to connect scales more closely to their related chords, as well as outline a particular chord progression. You will intentionally be emphasizing each note of the chord, creating a lead line that relates to the music. This approach is sometimes better than just randomly playing scales through a set of changes. You can apply this outlining technique to improvising, as well as to composing guitar solos, riffs, melodies and bass lines.

(We target chord tones by mapping an arpeggio pattern over a particular scale pattern. I presented CAGED arpeggio patterns in Fretboard Theory Chapter 3 and its related video program.)