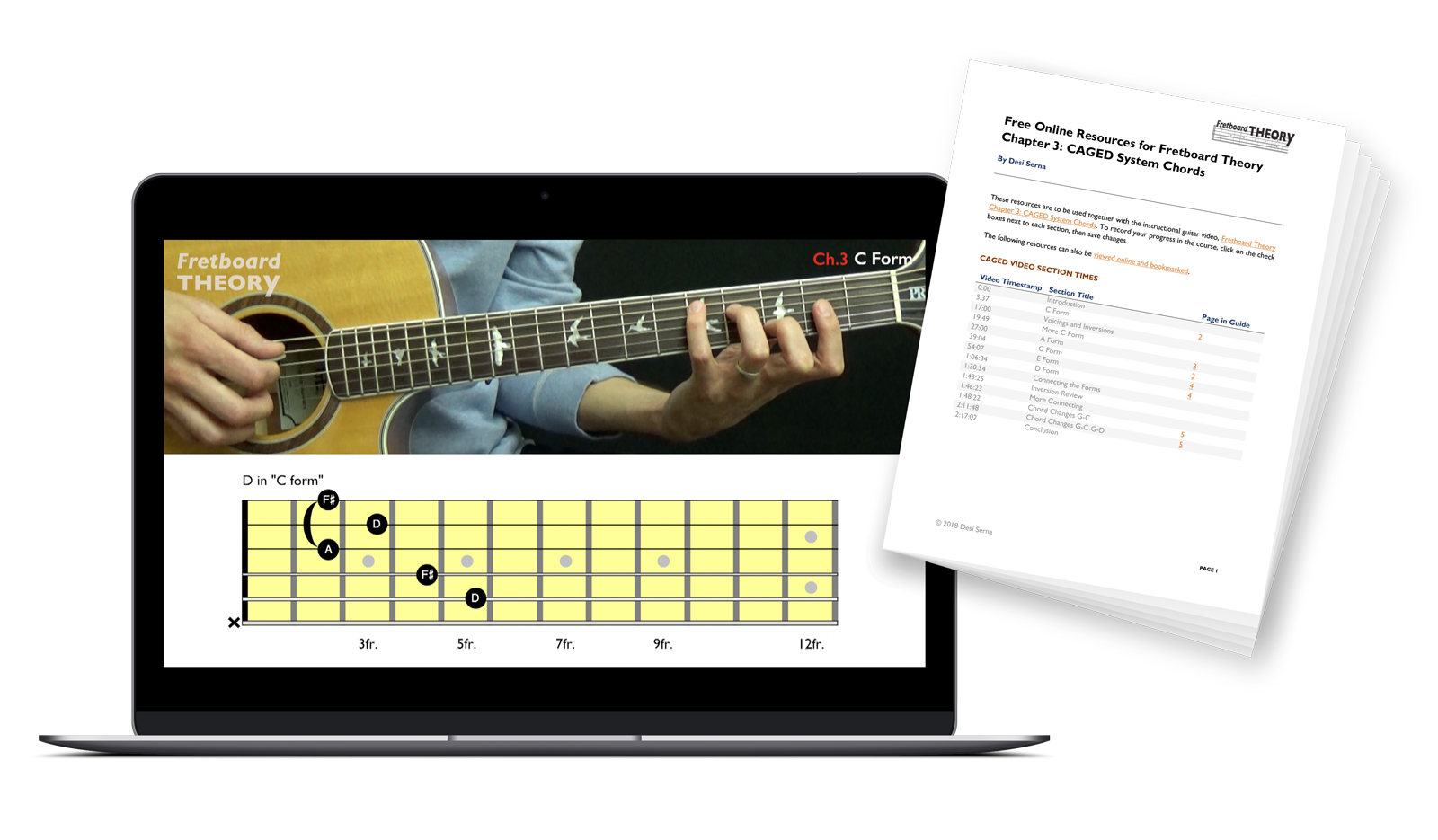 There are literally thousands of different kinds of chords and chord shapes that can be played on the guitar, but did you know that most are related in some way to just five core forms?

In the open position the five forms are C, A, G, E, and D. What’s that spell? CAGED.

Each one of the open chord forms can be turned into a barre chord and moved around the neck. You probably already do this with the E and A forms since they make what are considered to be standard barre chords.

But if you’re not moving the other forms too, then you’re missing out on some really cool stuff!

Now, moving the other forms is tricky. For example, barring with your index finger and building a C form with your remaining fingers is hard to do. Luckily, guitarists typically don’t use the C form this way. Instead, they play smaller and much more manageable portions of it. This is true for all the CAGED forms.

Additionally, each basic chord you play in the open position has related chord tones that fall outside the common chord shape. You learn where these extra notes are located by playing arpeggio patterns.

An arpeggio is the notes of a chord played one at a time in an ascending or descending order like a scale.

Arpeggios are useful for mapping out the locations of chord tones in each position. With a chord’s notes all in sight, you can grab them in different combinations to create different chord voicings and chord inversions. This is how you truly master the fretboard and have complete control over what you play. This is also when the chord shapes you have learned from various songs begin to make complete sense.

And when you know how to build the chords you need on the fly, you no longer need to memorize chord diagrams and remember chord shapes. Everything is in the system that’s right under your fingers!

Guitar CAGED system chords are taught in Fretboard Theory Chapter 3. This chapter features 2 hours and 18 minutes of video instruction plus added resources including song lessons and backing tracks. There are countless references to popular songs throughout the instruction so you can always connect what you learn to something familiar. 🙂

You can purchase the CAGED instruction by itself or as part of the larger and comprehensive Fretboard Theory guitar theory video series.

Whether you want to gain the skills necessary to play in the style of your favorite artists or write music better than ever before, the CAGED system chords are sure to open up the fretboard and take your playing to the next level.

Requirements: The CAGED instruction is for guitarists who are past the beginning stages of playing and are already familiar with using standard barre chords.

Get the CAGED Course